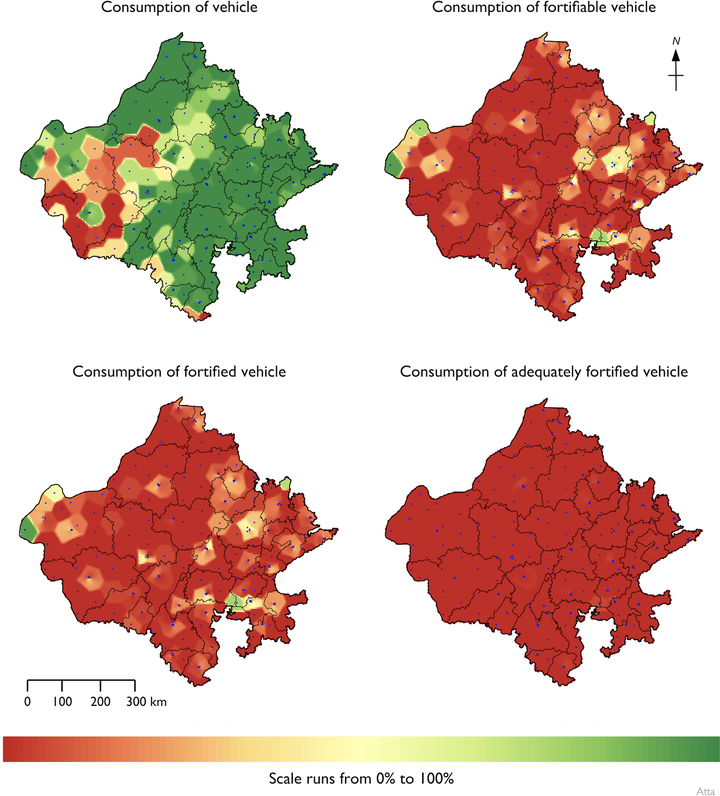 A spatially representative statewide survey was conducted in Rajasthan, India to assess household coverage of atta wheat flour, edible oil, and salt. An even distribution of primary sampling units were selected based on their proximity to centroids on a hexagonal grid laid over the survey area. A sample of n = 18 households from each of m = 252 primary sampling units PSUs was taken. Demographic data on all members of these households were collected, and a broader dataset was collected about a single caregiver and a child in the first 2 years of life. Data were collected on demographic and socioeconomic status; education; housing conditions; recent infant and child mortality; water, sanitation, and hygiene practices; food security; child health; infant and young child feeding practices; maternal dietary diversity; coverage of fortified staples; and maternal and child anthropometry. Data were collected from 4,627 households and the same number of caregiver/child pairs. Atta wheat flour was widely consumed across the state (83%); however, only about 7% of the atta wheat flour was classified as fortifiable, and only about 6% was actually fortified (mostly inadequately). For oil, almost 90% of edible oil consumed by households in the survey was classified as fortifiable, but only about 24% was fortified. For salt, coverage was high, with almost 85% of households using fortified salt and 66% of households using adequately fortified salt. Iodized salt coverage was also high; however, rural and poor population groups were less likely to be reached by the intervention. Voluntary fortification of atta wheat flour and edible oil lacked sufficient industry consolidation to cover significant portions of the population. It is crucial that appropriate delivery channels are utilized to effectively deliver essential micronutrients to at-risk population groups. Government distribution systems are likely the best means to accomplish this goal.